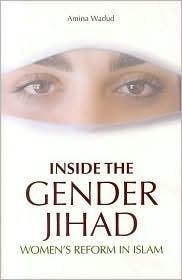 Inside the Gender Jihad: Women’s Reform in Islam

In this engaging study, Dr Amina Wadud, an Afro-American Muslim herself, introduces the feminist movement in Islam and delves into its challenges, its textual foundations in the Qur'an and its achievements.

Beginning with her own place in the effort for greater justice for women in Islam, Wadud goes on tackle a number of pertinent issues, including the state of Muslim women's studies as a discipline in mainstream academia and the role of Muslim women in the domestic space. [Språk: Engelska] Häftad