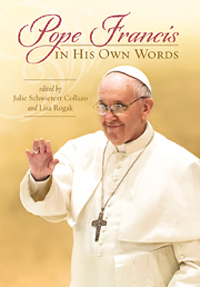 Pope Francis in His Own Words

The moment the identity of the newly elected 266th pontiff was revealed, it was clear to the thousands gathered in St. Peter's Square, and to the watching world, that this pope was different in fascinating and exciting ways — the first from Latin America, the first Jesuit, and the first to take the name Francis, in honor of St. Francis of Assisi.

When Pope Francis, formerly Cardinal Jorge Mario Bergoglio of Buenos Aires, spoke from the balcony of St. Peter's Basilica, he greeted his audience colloquially: “Brothers and sisters, good evening.” He told a joke, commenting that his fellow cardinals had “gone to the ends of the earth” to find him. Then, downplaying his power and position, he proceeded not to bless the crowd but to ask them for their blessing: “I ask a favor of you,” he said, bowing humbly. “Let us make, in silence, this prayer: your prayer over me.”

Francis has repeatedly foregone the fancy dress, lavish accommodations, and other luxuries of his position, emphasizing pastoral work with the sick and the poor and always seeking to empower the underdog (including his favorite soccer team in Buenos Aires — San Lorenzo). This revealing collection of his own words, gathered from sermons, interviews, and the Pope's books, prompts understanding and insight into his way of being and believing — and inspires goodwill, love, and hope.

Quotations from Pope Francis in His Own Words:

“To recognize, accept, and live with all ways of thinking and being does not imply the renunciation of one’s own beliefs.”

“In a society where lies, cover-ups, and hypocrisy have caused people to lose basic trust in the social contract, what could be more revolutionary than the truth?”

“Human history, our history, the history of every one of us is never ‘finished’; it never runs out of possibilities. Rather, it is always opening to the new — to what, until now, we’d never even had in mind. To what seemed impossible."