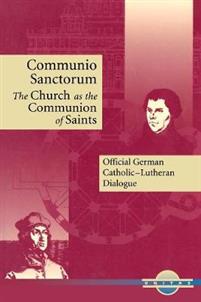 Communio Sanctorum is the most recent product of the Lutheran-Catholic dialogue in Germany and the first major Lutheran-Catholic ecumenical statement since the ground-breaking Joint Declaration on the Doctrine of Justification. It focuses on the ecclesiastical issues that the Joint Declaration identified as the remaining obstacles to Lutheran-Catholic communion. It describes the church as the communion of saints and then uses that description as a framework for addressing some of the most ecumenical issues: sacraments, ministry, the role of the church in salvation, and papacy.

While not claiming to have finally settled such difficult issues Communio Sanctorum does represent a new convergence on these questions. Uniquely, the dialogue then uses this understanding of the communion of the saints to address issues related to the communion that transcends death: the nature of eternal life, prayers for the dead, veneration of the saints and Mary.

Communio Sanctorum has sparked vigorous debate in Germany and makes a major contribution both to Lutheran-Catholic dialogue and to the wider ecumenical enterprise.