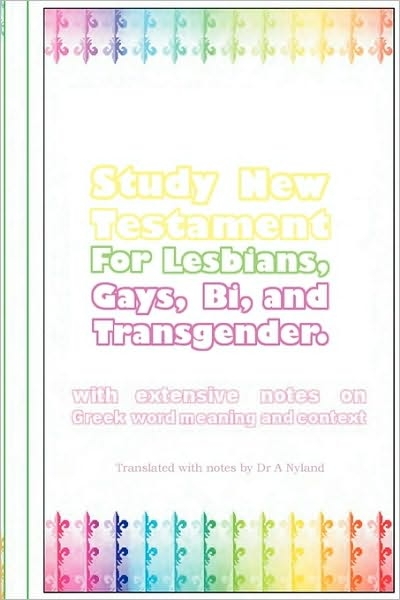 The World's first Study Bible for the Gay and Lesbian community.

Deep in the shuddering guts of that religion known as Christianity is a rich and troubling history of persecution.

The singling out of those the church professes to be anti-God, such as gay, lesbian, bi and transgendered people.

All built up from the foundation that is God's Word, the Bible.

There is no Scriptural foundation for this persecution, no anti-gay passages in the Bible that the Church professes there are.

There have been mistranslations.

But none of this is set down in the original languages and context of the Bible as God's Way.

Dr Nyland is a Classical Greek language scholar who served as Faculty in the Department of Classics and Ancient History at the University of New England, Australia.

Her research field is Greek lexicography from Homeric to Hellenistic times.

She has published academic papers in the fields of both Greek and Hittite lexicography.

Dr Nyland is known as the translator of The Source New Testament (TSNT). [Språk: Engelska] Häftad