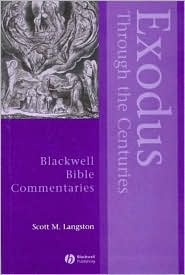 This bible commentary looks at how Exodus has influenced and has been influenced by history, religion, politics, the arts and other forms of culture over the ages.

* A bible commentary tracing the reception history of Exodus from Old Testament times, through the Patristic and Reformation periods, to the present day.

* Considers the ways in which Exodus has influenced and has been influenced by history, religion, politics, the arts and other forms of culture in Jewish, Christian and secular settings.

* Looks at how Exodus has served as a tool of liberation and tyranny in a variety of settings.

* Shows how Exodus has been used to shape the identities of individuals and groups.

* Discusses the works of current and past poets, musicians, film-makers, authors and artists influenced by Exodus.

* Addresses uses of Exodus related to American and European history such as the Glorious Revolution, colonialism, the American Revolution, Civil War, Civil Rights Movement, African-Americans, and Native Americans, as well as uses by prominent and little-known historical figures

* Considers the impact of the Ten Commandments and other laws, in legal, political and religious contexts. [Språk: Engelska] Häftad