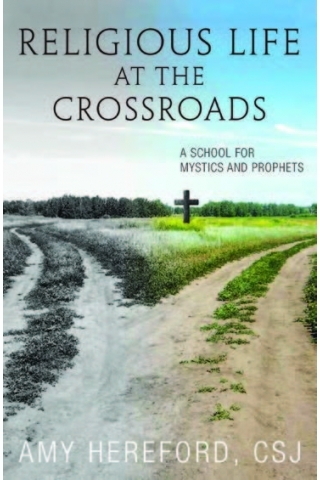 Religious Life at the Crossroad: A School for Mystics and Prophets

¨»Those in and around religious life have known for decades that something new was coming, and we have strained the eyes of our hearts to catch a glimpse of what it might look like.

We knew that this new development was beyond our imagination, but when it finally appeared, it would do honor to the heritage of religious life.

The day is finally dawning and the new form is beginning to emerge in our spirits, imaginations and conversations.

The reinvention of religious life for today involves renewed commitment to the choice of radical Christian community that inspired, attracted and sustained the religious of every age.»

Amy Hereford is a Sister of St. Joseph of Carondelet from St. Louis.

She works as an attorney and canonist, consulting with many religious institutes on a wide variety of legal matters.

She has been in religious life for 25 years, part of a minority cohort of post-Vatican II women religious.

She has graduate degrees in spirituality, communication, and civil and canon law. [Språk: Engelska] Häftad