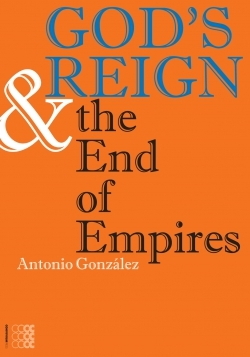 God’s Reign + the End of Empires

In this profound and enlightening book, spanish theologian Antonio Gonzalez analyzes the nature of global empires since the time of Babylon.

His premise is that empires maintain power by any means necessary, including exploitation, injustice and idolatry. It is in this context of empire - specifically the Roman empire - that Jesus proclaimed the reign of God as opposed to the reign of Caesar. Within God's reign, God alone rules, with mercy, love, justice, and special concern for the oppressed.

Imbued with this faith, a new community of believers developed, particularly among the poor, who lived what Jesus proclaimed, sharing resources and practicing equality and forgiveness rather than retribution.

The author documents how, during the first centuries A.D., post-resurrection communities continued to practice living in the reign of God.

With the rise of Emperor Constantine, however, this vibrant counter-cultural movement of believers became coterminous with, and was institutionalized within, the Roman Empire.

When that empire fell, over time the institutional church became the dominant power with all the trappings of empire.

The author shows how the evils inherent in empire are still prevalent today throughout the world, with the church often blessing and sharing in the power.

God's Reign and the End of Empires concludes by focusing on how Christian counter-forces throughout the centuries have attempted to reclaim the spirit and praxis of the reign of God as modeled by Jesus, and it examines in depth both secular and faith-based contemporary movements that reflect this praxis by working to counteract the detrimental effects of empire.

The author sees these movements as reason for hope. [Språk: Engelska] Häftad