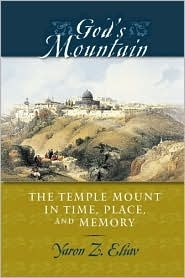 God’s Mountain: the Temple Mount in Time, Place and Memory

This provocative study of Jerusalem's Temple Mount unravels popular scholarly paradigms about the origins of this contested sacred site and its significance in Jewish and Christian traditions.

In God's Mountain, Yaron Z. Eliav reconstructs the early story of the Temple Mount, exploring the way the site was developed as a physical entity, religious concept, and cultural image.

He traces the Temple Mount's origins and investigates its history, explicating the factors that shaped it both physically and conceptually.

Eliav refutes the popular tradition that situates the Temple Mount as a unique sacred space from the earliest days of the history of Israel and the Jewish people-a sequential development model that begins in the tenth century BCE with Solomon's construction of the First Temple.

Instead, he asserts that the Temple Mount emerged as a sacred space in Jewish and early Christian consciousness hundreds of years later, toward the close of the Second Temple era in the first century CE.

Eliav pinpoints three defining moments in the Temple Mount's physical history: King Herod's dramatic enlargement of the mountain at the end of the first century BCE, the temple's destruction by the Roman emperor Titus in 70 CE, and Hadrian's actions in Jerusalem sixty years later.

This new chronology provides the framework for a fresh consideration of the literary and archeological evidence, as well as new understandings of the religious and social dynamics that shaped the image of the Temple Mount as a sacred space for Jews and Christians.

Yaron Z. Eliav is the Jean and Samuel Frankel Associate Professor for Rabbinic Literature at the University of Michigan. [Språk: Engelska] Inbunden