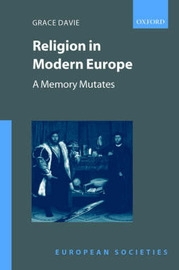 »Religion in Modern Europe examines religion as a form of collective memory.

This is a memory held in place by Europe's Institutional churches, educational systems, and the mass mediaall of which are themselves responding to rapid social and economic change.

Europe's religious memory is approached in the following ways: as vicarious - a particularly European characteristic, as precarious - especially among young people, and as it is portrayed by the media.

The memory may fragment, be disputed, and in extreme cases, disappear. Alternatives may emerge.

The challenge for European societies is to affirm healthy mutations in religious memory and discourage others.