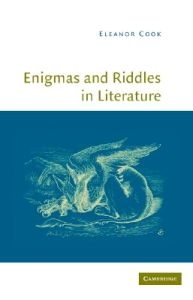 Enigmas and Riddles in Literature

How do enigmas and riddles work in literature?

This benchmark study investigates the literary trope of the riddle, and its relation to the broader term 'enigma', including enigma as large masterplot.

Cook argues for a revival of the old figure of speech known as 'enigma' from Aristotle to the seventeenth century by demonstrating its usefulness.

The history and functions of enigma draw on classical and biblical through to modern writing.

An important contribution to studies of poetic thought and metaphor, this anatomy of the riddle will appeal particularly to readers and scholars of poetry, modern American and comparative literatures, rhetoric, and folk-riddles.

* The first full-length study of how enigmas and riddles, both large and small, work in literature.

She has published widely on poetry and poetics, allusion, the English Bible, and the riddle in literature [Språk: Engelska] Häftad