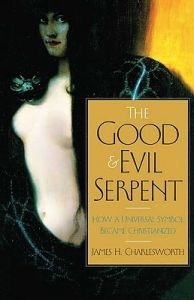 In a perplexing passage from the Gospel of John, Jesus is likened to the most reviled creature in Christian symbology: the snake.

Attempting to understand how the Fourth Evangelist could have made such a surprising analogy, James H. Charlesworth has spent nearly a decade combing through the vast array of references to serpents in the ancient world - from the Bible and other religious texts to ancient statuary and jewelry.

Charlesworth has arrived at a surprising conclusion: not only was the serpent a widespread symbol throughout the world, but its meanings were both subtle and varied.

In fact, the serpent of ancient times was more often associated with positive attributes like healing and eternal life than it was with negative meanings.

This groundbreaking book explores in plentiful detail the symbol of the serpent from 40,000 BCE to the present, and from diverse regions in the world.

In doing so it emphasizes the creativity of the biblical authors' use of symbols and argues that we must today reexamine our own archetypal conceptions with comparable creativity. [Språk: Engelska] Inbunden