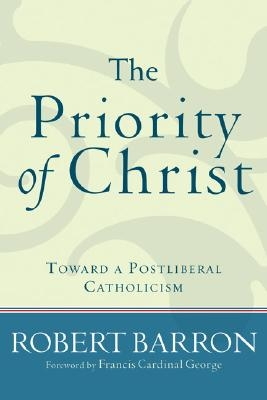 Priority of Christ: Toward a Postliberal Catholicism

For a long time, Christians have tried to bridge the divide between Christianity and secular liberalism with philosophizing and theologizing. In The Priority of Christ, Father Robert Barron shows that the answer to this debate--and the way to move forward--lies in Jesus. Barron transcends the usual liberal/conservative or Protestant/Catholic divides with a postliberal Catholicism that brings the focus back on Jesus as revealed in the New Testament narratives. Barron's classical Catholic post-liberalism will be of interest to a broad audience including not only the academic community but also preachers and general readers interested in entering the dialogue between Catholicism and postliberalism.

From the Back Cover

»By displaying how an imaginative human spirit can be illuminated by the manifold sense of scripture, as well as activating tradition to dissolve lingering philosophical distractions, this stunning summa for a 'postliberal Catholicism' will at once subvert any tendency among the faithful to demand a facile 'fix' as well as offer lucid direction for anyone daring to undertake a pilgrimage of understanding--in and with the Christ.» --David Burrell, C.S.C., University of Notre Dame / Tantur Ecumenical Institute (Jerusalem)

»Catholic theology stands at a foundational moment, and in this extended meditation on the figure of Christ Robert Barron boldly argues for a Catholicism that rethinks the controversy between modern and postmodern thought through such classic theological formulations as the controversy between Aquinas and Duns Scotus on the being of God. Broad in reference and informed by the homilist's touch, The Priority of Christ will be an important contribution to a conversation the Church must have.» --Richard A. Rosengarten, University of Chicago

»It is crucial for Christians to apprehend the implications of Robert Barron's trenchant thesis: 'Modernity and decadent Christianity are enemies in one sense, but in another sense, they are deeply connected to one another and mirror one another.' Moving beyond the 'decadent Christianity' that mistakenly sought its very starting points in the epistemological and metaphysical dead ends characteristic of 'modernity,' Barron expertly weaves together Thomistic and Balthasarian motifs into a robust short summa that treats Jesus Christ, God the Trinity, the created order, and Christian ethics. Readers seeking spiritual and intellectual renewal will be revitalized by this much-needed book, which overflows with love of God and his path of salvation.» --Matthew Levering, Ave Maria University

»Drawing deftly on Aquinas, Newman, Lonergan, Balthasar, and many others, Barron convincingly explains what a postliberal Catholic theology might be. But the great merit of this book is that he not only talks about what theology should be, he actually does it--above all in his lucid mystagogy on a series of Gospel stories, and in striking meditations on the mind of Christ embodied in four great women saints of our time.» --Bruce Marshall, Southern Methodist University [Språk: Engelska] Häftad