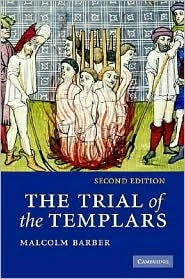 Trial of the Templars

The Templars fought against Islam in the crusader east for nearly two centuries. During that time the original small band grew into a formidable army, backed by an extensive network of preceptories in the Latin West.

In October 1307, the members of this seemingly invulnerable and respected Order were arrested on the orders of Philip IV, King of France and charged with serious heresies, including the denial of Christ, homosexuality and idol worship.

The ensuing proceedings lasted for almost five years and culminated in the suppression of the Order.

The motivations of the participants and the long-term repercussions of the trial have been the subject of intense and unresolved controversy, which still has resonances in our own time.

In this new edition of his classic account, Malcolm Barber discusses the trial in the context of new work on the crusades, heresy, the papacy and the French monarchy. [Språk: Engelska] Häftad