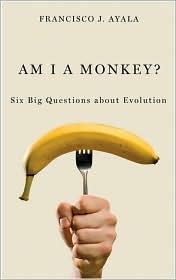 Am I a Monkey? Six Big Questions About Evolution

Despite the ongoing cultural controversy in America, evolution remains a cornerstone of science.

In this book, Francisco J. Ayala-an evolutionary biologist, member of the National Academy of Sciences, and winner of the National Medal of Science and the Templeton Prize-cuts to the chase in a daring attempt to address, in nontechnical language, six perennial questions about evolution:

* Why Is Evolution a Theory?

* Do All Scientists Accept Evolution?

* How Did Life Begin?

* Can One Believe in Evolution and God?

This to-the-point book answers each of these questions with force.

He lays out the basic science that underlies evolutionary theory, explains how the process works, and soundly makes the case for why evolution is not a threat to religion.

Brief, incisive, topical, authoritative, Am I a Monkey? will take you a day to read and a lifetime to ponder. [Språk: Engelska] Inbunden